Save Big Time at the Pump Some of the tangible benefits that you can expect from regular oil changes are improved gas mileage and a much longer lifespan to your engine overall. You’ll be saving at the pump, in other words, and suffer fewer hassles and inconvenient breakdowns by getting an oil change using synthetic oil blends formulated for your specific vehicle.

While regular oil changes might be the most affordable and efficient way to keep your engine in tip-top shape, you might actually need to get regular maintenance at an auto shop like All Around Auto Repair to stay within warranty.

A lot of extended manufacturer warranties these days include regular oil changes as a precondition for maintaining coverage. Whether or not you technically need regular oil changes, they’re a great thing to do for your engine and will, all things being equal, save you a lot of money in the long haul.

Skipping to work is fine, but skipping oil changes probably isn’t. Why’s that? The oil in your engine will naturally disintegrate over time due to the high temperatures that it takes to run an engine – i.e., thermal breakdown. When that happens, your engine parts aren’t getting the lubrication they need.

On a smaller and simpler scale, you could compare an engine that’s experienced thermal breakdown with something like a bike chain that doesn’t enough grease. What happens in both cases is that the metal parts will wear down prematurely because they’re not being lubricated properly.

Today’s synthetic oil blends are doing more than lubricating your vehicle’s engine, though. What’s going on is that these oil blends are actually accumulating and essentially neutralizing gunk that can otherwise build up and gradually damage your engine over time.

Your engine oil can collect a lot of engine gunk as time goes on, but at some point you need new oil because the old oil has collected and neutralized as much of the bad stuff as it can. As time wears on, gunk and particulate matter will settle and cause long-term engine damage.

Old oil that isn’t really doing its job anymore can cause sludge buildup in the engine like a traffic jam that blocks a number of parts from moving properly. Because of the logjam, oil won’t be able to efficiently get to various valvetrain components like your engine’s crank- and camshafts.

What About If You’ve Already Skipped?

If you know or just suspect that you’ve missed an oil change, then what should you do? First, don’t panic. You need to head in to All Around Auto Repair and find out if any damage has been done to your engine, if your parts are properly oiled, and if there’s any sludge buildup.

The ASA-certified mechanics at All Around Auto Repair can answer all three questions for you by running a series of tests, such as vacuum and leak-down tests. Both of these tests are designed to give a gauge on engine performance.

A vacuum test should technically clue mechanics in to the differences between the ambient atmospheric pressure and the vacuum inside your intake manifold.

Basically, a vacuum test can tell mechanics whether there’s something like an intake gasket issue, poor timing, or low compression – vacuum tests are a good indication of your engine’s overall mechanic performance.

A leak-down test is somewhat more complicated to do as it involves putting compressed air into the cylinder and gauging the rate at which that compressed air leaks out.

Regular oil changes should result in your acing both tests because your engine would literally be working better mechanically and getting properly lubricated the whole time. Schedule an oil change appointment with All Around Auto Repair online or by calling (707) 837 – 0646 today.

Oil Changes at All Around Auto Repair

We have a lot to say about Oil Changes and the importance of regular maintenance for your vehicle. See our articles below to learn more about how to keep your vehicle in it’s best condition:

Time to Get Serious: These Symptoms Demand Auto Service!

The average driver in the United States is putting about 13,000 miles on their vehicle every single year. That puts a lot of wear and tear on vehicles, but it also means that you're probably pretty good at spotting problems. Here's the thing - while the average driver...

END_OF_DOCUMENT_TOKEN_TO_BE_REPLACED

Car Shops Near Me: Four Most Popular Kinds of Auto Maintenance

Going to an auto shop that has everything under one roof is a real luxury. Imagine if you had to go to ten different auto shops...one for brakes, one for engine work...you get the idea! Car shops near me like All Around Auto Repair can handle all kinds of vehicle...

END_OF_DOCUMENT_TOKEN_TO_BE_REPLACED

Appreciating the Differences Between Automotive Technicians and Auto Mechanics

Ask five different auto mechanics to lay out the differences between an automotive technician and a mechanic and you're likely to get eleven different answers and a lecture with bullet points. What gives? Are they really that different? Yes and no. Auto Mechanics...

END_OF_DOCUMENT_TOKEN_TO_BE_REPLACED

Car Leaking Oil? Take It to an Auto Center!

A small puddle of oil left on the pavement as you pull out of a parking space or blue oil coming out of the tailpipe might seem like no big deal. The fact is that oil puddles left behind can indicate a number of issues that need to be addressed at an auto center. Get...

END_OF_DOCUMENT_TOKEN_TO_BE_REPLACED

Car Repair Shops Near Me: This is How to Decide

Asking around, there seems to be some confusion about the differences between tire rotations and wheel alignments. When you factor in tire pressure and the ideal amount of tire tread (the ridges and grooves on the surface of your tires) for optimal traction, most...

END_OF_DOCUMENT_TOKEN_TO_BE_REPLACED

Getting Vehicle Maintenance at an Auto Garage

Routine auto maintenance could be likened to going to the doctor once a year for an annual physical, but that analogy is a bit misleading. The reason is that auto maintenance addresses problems on the spot thanks to electronic diagnostic tools and can actually fix...

END_OF_DOCUMENT_TOKEN_TO_BE_REPLACED

What Could Your Check Engine Light Actually Mean?

The vast majority of vehicle owners aren't entirely sure how to respond to a check engine light that suddenly comes on. What's the best response? A shrug, mild concern, or something that really gets the heart racing and focuses the mind? The Catch-all of Indicators ...

END_OF_DOCUMENT_TOKEN_TO_BE_REPLACED Does It Matter Where You Go for an Oil Change?

A lot of drivers prefer to avoid going to the dealership for service because of the high costs, long waits, and upselling tactics. For such a simple job as an oil change, can’t any good mechanic handle it just the same? As long as you get an appropriate type of oil...

END_OF_DOCUMENT_TOKEN_TO_BE_REPLACED The Auto Tune Up Is Obsolete, But Not Regular Maintenance

For most cars manufactured in the 21st century, the traditional auto tune-up has become obsolete thanks to computers, longer-lasting parts, and the modern fuel injection system. But don’t be fooled: your car still needs regular maintenance! A car care checklist simply...

END_OF_DOCUMENT_TOKEN_TO_BE_REPLACED

Regular auto maintenance is critical to the longevity of your vehicle and it can save you a ton of money. If you regularly have your vehicle's fluids changed out and your systems checked, then you're not going to be spending as much money on costly repairs later on....

END_OF_DOCUMENT_TOKEN_TO_BE_REPLACED

Routine Auto Maintenance is All About Value at All Around Auto Repair!

Auto maintenance is one of those rare things that is super easy to do and gives you real benefits. Sure, something like working out and going to the gym gives you benefits, but it can also be hard and time consuming.  Coming in to All Around Auto Repair for...

All Around Auto Repair provides maintenance for cars of all makes and models.  Our mechanics also service most types of recreational vehicles, boats, and motor homes.  We use sophisticated diagnostic computers to find out why your check engine light went on and identify any other problems with your vehicle.

A regular oil change lubricates your engine in the short term and provides long-term protection by actually cleaning your engine’s parts as it goes about its business of taking you from point A to point B. 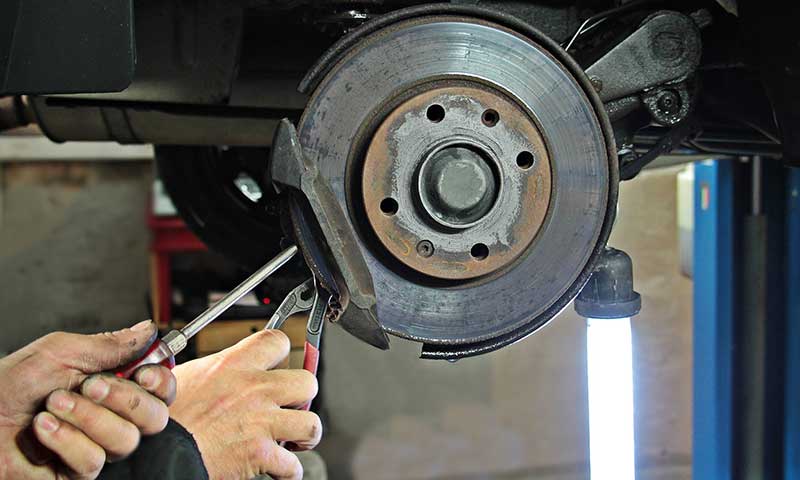 Too many people think that brake problems either mean you need new brake pads or all new brakes. A smart auto mechanic can find other solutions. We love solving problems and educating our customers. Slight vibrations in your steering wheel or brakes that grind and become less effective are surefire, though sometimes subtle, signs that you're overdue for a tune up. Don't wait for the check engine light. Getting your vehicle serviced is critical to keeping your vehicle running smoothly and on the road for longer. You're probably already pretty familiar with the importance of getting your oil changed, but did you know that this is only one kind of car service that you can get? With many sophisticated and advanced improvements along with the use of modern electronics and materials car engines have become more and more complex to understand and their repair and maintenance a bit more complicated. Without a doubt, diagnostics tools make life easier for all of us. Computers and sensors inside your car can alert you to trouble before something bad happens or significantly speed up the search for a solution. Auto experts say that the benefits of maintaining a comfortable temperature far outweigh the marginal increase in fuel economy that you'll get from being sweaty and uncomfortable by going a few degrees warmer. Good transmission service and repair is essential for your vehicle because it will promote optimal performance and prevent the failure of the component. Though the quality and lifespan of the typical clutch has improved over the years, it will not last forever. If you have driven your vehicle in excess of 20,000 miles, you should have its clutch inspected at least once a year.